I arrived in Chicago on Tuesday, I love visiting my sister and her family, it's not often that I come out here, but I should do it more often.  It's only a 2.5 hour flight and this time of year, it's fairly inexpensive to fly.  My flight from NYC to Chicago only cost me $99!  What a bargain!  I took these photos from the airplane.  I love going to the mid-west and seeing all the squares and farmland!  It looks like a patchwork quilt! 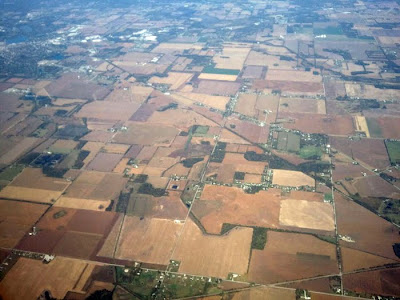 This photo I took as we were getting into Chicago. In the back, you'll see Lake Michigan. It's so pretty from this viewpoint.  When I landed at Midway, I headed to the baggage claim and waited and waited for my luggage to load onto the carousel.  Forty minutes later and no luggage.  I checked with the attendant and she said there was no more luggage coming.  Argh!  Southwest Airlines had lost my luggage.  The flight I was on had a stop in Chicago and then they were on their way to St. Louis.  I suspect my luggage went along for the ride.  I filled out a lost luggage report and hoped for the best. 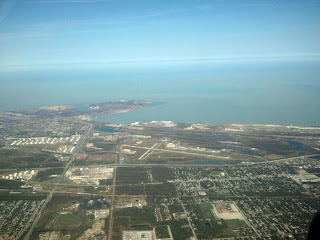 My sister works in downtown Chicago, so I told her I would take the train from the airport to meet her at her office.  I saw this bike rack on my way to the CTA entrance at Midway.  I was so impressed that many people ride their bikes to the airport!  Wow, so green! 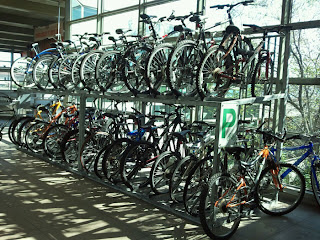 This was my first time taking the CTA and my sister said it was pretty easy. She said, if you can navigate through the New York subway system, this one will be a breeze for you. There is just one train from the Airport to downtown. She also said don't call it the subway though, because people will know you aren't from around these parts. The locals refer to it as the "L". I found the train easily enough and headed to the Chicago Loop.  The train was indeed quite easy to figure out.  Much much easier than NYC! 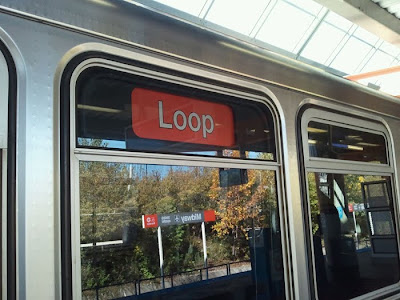 When I arrived to downtown Chicago, my stomach was growling.  I was starving from traveling and I decided to get some lunch.  Feeling sad about my lost luggage, I decided to get something that would make me immediately feel better.  I went to get a Chicago dog with fries.  This Chicago hotdog had tons of toppings, and is definitely not something you can easily get in NYC.  On the hotdog was relish, mustard, onion, a pickle, hot peppers, and tomatoes!  It was delicious and definitely made me temporarily feel better about having no luggage!  I'm not sure if the locals eat these or if it's more a touristy thing.  It sure is good!! 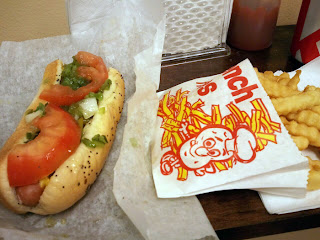 Later that night, I received a phone call from Southwest stating that they found my luggage!  It was returned to me at 12am Midnight.  Thank goodness I didn't have to buy new clothes during my stay here!
Posted by meemsnyc at 1:49 AM