Last weekend, we took a ride down to Antelope Island State Park, the largest island in the Great Salt Lake.  The island is uninhabited but it is home to lots of wildlife, including a free-roaming herd of 500 bison, antelope, pronghorn and bighorn sheep.  We drove around for an hour or so before we spotted some bison.  Can you see them in this photo?  Hahahaha, It's way out in the distance.  Unfortunately, I only had my crappy cellphone camera with me.  It's funny how there are over 500 bison on the island and yet it took us an hour to find them.  We were wondering, "where were they hiding??" 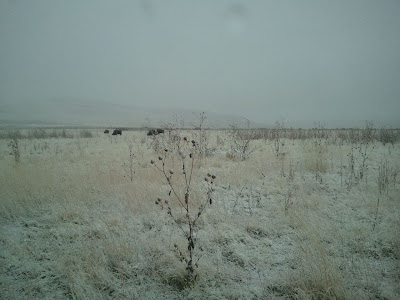 Then we saw a little herd of bison that was only about 50 feet from the road.  They actually looked much closer than this in person, but my cell camera doesn't do it justice.  From wikipedia, "The bison were introduced to the island in 1893, and the bison has proven to be a valuable genetic pool for bison breeding and conservation purposes. The bison do well because much of the island is covered by dry, native grassland."  It was such a cool experience to see the bison up close.  The most amazing thing ever to see wild bison in natural habitat.  Truly awesome!  I only wish this photo was better! 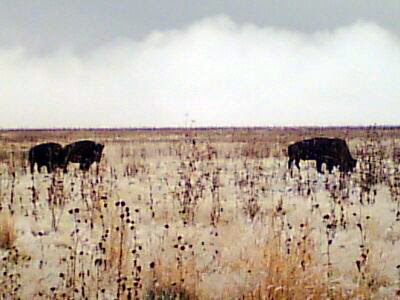