Garden Kitty is Back!

All of last year, when we were out in the garden, we had a little visitor come visit us practically every other day.  We called him Garden Kitty, because he loved to go into the vegetable garden with us and roll around in the beds.  I didn't really want him to be in there, so I would pick him up and scoot him out of the veggie garden and let him play in the yard instead.  He was a good kitty though, he didn't eat any of the veggies or pull them out of the ground.  I was hoping that Garden Kitty is someone's outdoor pet, but he's outside ALL the time, so I fear he's a stray, or someone used to have him as a pet and abandoned him.  He's really friendly and let's you pick him up and pet him.  Look at this face!  I was so happy to see that he survived our harsh winter.  And the first time I saw him this spring, he greeted us with meows and purrs.  When I see him, I give him food and water and he scarfs it up.  He's a hungry little stray. 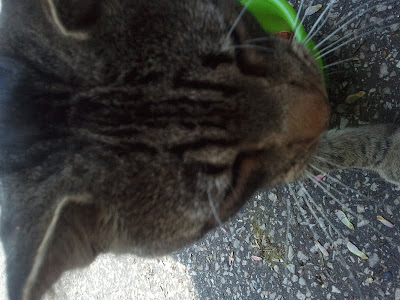 On this day, he decided to take a nap on our patio.  I noticed that he has a new scar on his forehead.  Poor kitty, he must have gotten into a fight with another animal. 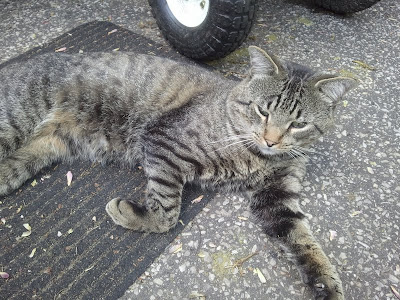 Here he is napping.  I need to give him a new name.  Calling him "garden kitty" is not a good name at all.  What do you think we should name him? 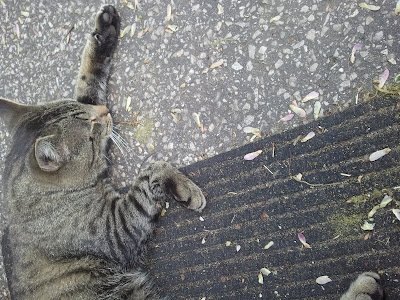 After I was done with my garden chores, I went inside.  Moments later, I noticed he was outside waiting for me by the back door.  This totally breaks my heart.  If I didn't already have 3 cats, I would definitely take this fellow in. However, he's an outdoor cat, and all of my cats are indoor cats.  I  couldn't have one cat be outdoors and the others indoors, for fear that he could bring illnesses and fleas to the others.  We'll do our best to make Garden Kitty's life comfortable by feeding him and giving him an outdoor shelter.  Maybe he'll just be our outdoor only cat, if he doesn't already have an owner in the neighborhood.  There is still a possibility that this is someone's cat, because of how friendly he is.  I hope so! 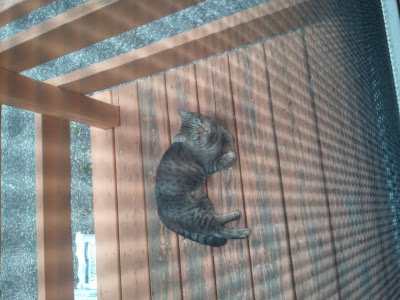