When we were up visiting the family farm, the one thing that we noticed is how close the community is. When one farmer needs help, neighbors do not hesitate to help out.  We found out that one of farmers that my father-in-law is friends with had a tragic fire in his barn and all of his livestock perished.  This is really sad since this is his livelihood.  My father-in-law decided to give him 2 of his pigs that he's been raising on the farm to help him start over.  I thought that was pretty awesome.

The brown pig in the photo is a pig that my husband and I purchased to be raised on the family farm.  He's been raised on 100% organic feed and organic vegetables grown on the farm.  I got a lot of flack when friends and other family heard that we are raising a pig to later be our consumption, and that my husband named him "Yummy"...but to be honest, I rather know that my pork was raised ethically and organically.  He gets an outdoor pen to run around in and a stall in the barn to sleep in.  I can't say for sure how the plastic wrapped pork that I buy at the supermarket was treated or what they ate.  Since my father-in-law gave his other two pigs away, we decided to share the brown pig with my in-laws.  It's the least we could do for raising Yummy for us. 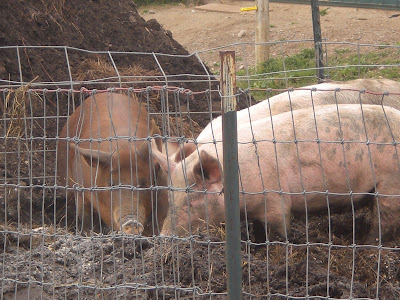 When we were at the farm, one of their neighbors dropped off a gigantic watermelon for us to take home.  How nice is that??  They heard that we were visiting and they dropped it off!  So sweet. 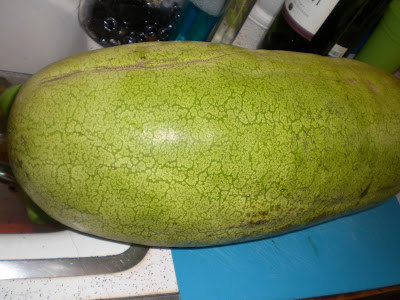 I couldn't wait to try it.  It was sweet and delicious! 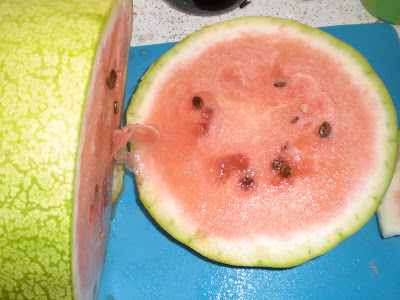 As I continued cutting the watermelon, I noticed that the bottom half of it was all rotten!  Oh no!!!  It was a wet mess.  I managed to salvage half of the watermelon that wasn't rotted.  Everything else that was inedible went into our compost so nothing went to waste. 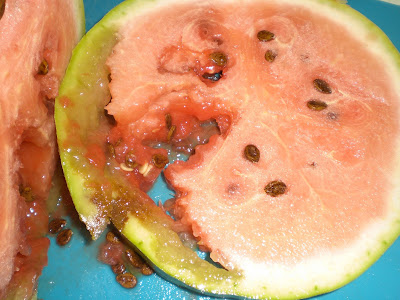