What do you do with a bushel of tomatoes?

A lot of the produce that is grown on my in-laws farm is sold at two local farmers markets in their area. Upon speaking with his dad, the hubs said to me that we could go out to the fields and harvest some Roma tomatoes because they were too ripe to sell at the market. Since there were more tomatoes than the family could use, he said we could take as much as we wanted because it was going to turn into compost. Nice!  Out to the fields we went and picked a bushel of tomatoes. 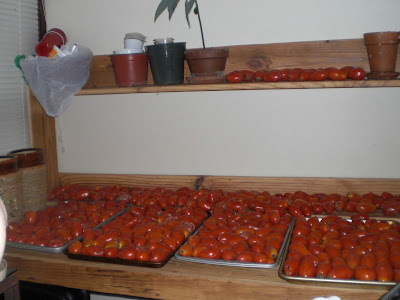 What does one do with a bushel of really ripe tomatoes? Sauce here we come! I took half of the tomatoes, washed and removed all the skin by putting them in scalding water. This took a very long time to remove the skin. I do like my sauce without skin, but this was a long process. I think it took me 2 hours to wash the tomatoes and remove the skin off of half a bushel. I have to re-think whether or not I want to do that in the future. Maybe I can learn to like tomato peel in my sauce. 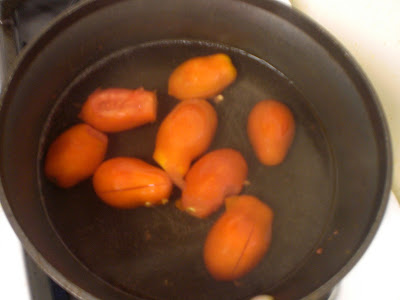 Half of a bushel filled two large stockpots, along with oregano, basil herbs grown from our garden.  I simmered the sauce for about 3 hours. 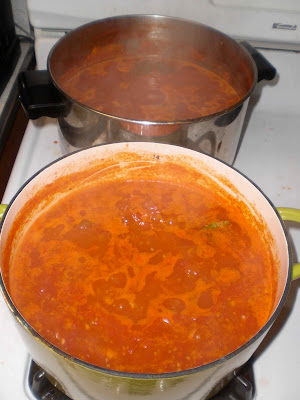 This was my first time ever canning sauce so I was dreaming of lots and lots of cans that this would produce, however I forgot how reduced sauce gets when you cook it down.  In the end, all that work made only 5 quarts of sauce.  I laughed out loud, but it was a "All that work, and I can't believe I made only 5 quarts" laugh.  Haha.  My husband laughed and said, "It's so much easier to buy a jar from the supermarket".  He's right, but I think my sauce tastes better.  And it's 100% organic! 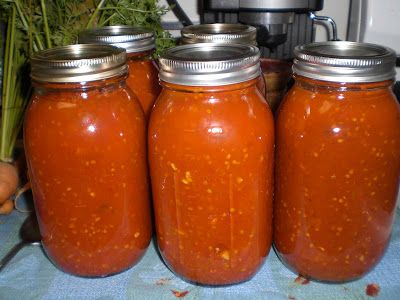 The following day, I took the other half a bushel and decided to make oven roasted tomatoes. I've read on many blogs about how incredibly tasty oven roasted tomatoes were.  I followed the recipe on Smitten Kitchen. Wash all the tomatoes and slice in half in a large mixing bowl, mix with olive oil, salt, pepper, garlic and fresh herbs.  This smelled amazing, I could eat it just like this!! 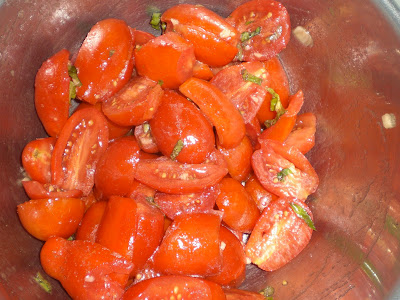 I lined the tomatoes on baking cookie trays lined with aluminum foil. Foil makes cleaning so much faster! 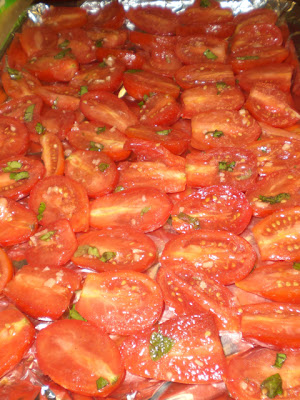 To maximize on oven space, I put a filled tray on each oven rack. Roast baby roast. 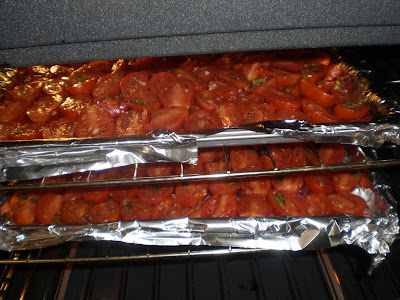 I guess my tomatoes were too large because it didn't take 3 hours for this babies to roast like it says in the recipe. It took mine 7 hours! LOL. I really don't think it's a good use of the energy it takes to run the oven.  I need to invest in a dehydrator!  Look how much the tomato shrunk?  I packed those tomatoes in, where they practically touched each other.  I love how much it shrunk. 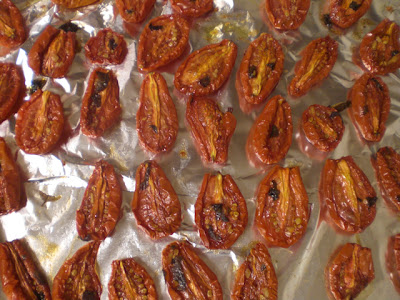 I transferred the tomatoes onto plates to let them cool down to room temperature. I popped one in my mouth, and yes, the flavor is like an intense tomato. 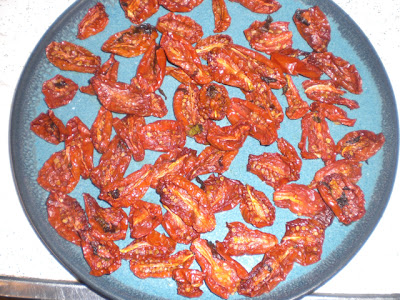 All that work and it only made one quart jar of oven roasted tomatoes. (sigh) Maybe I should have stuck to making sauce! hahahahaha 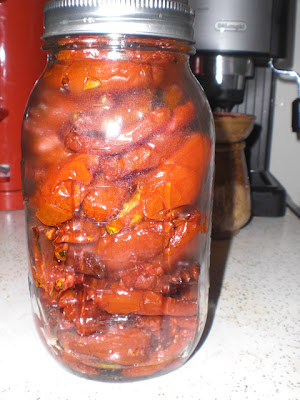