In our house, my husband rarely cooks. On the few occasions that he does, once he forgot to turn off the burner and left a frying pan of scrambled egg remnants cooking until it was charred. Thank goodness I smelled the burning eggs!  He doesn't even grill, whenever he does everything turns out blackened even if it wasn't meant to be. The one thing that he is really good at however, is baking the perfect whole chicken! Every time he roasts a bird, it always comes out perfectly cooked and juicy. What's his secret? Beer, Butter, and Maple Syrup.  He puts a few pats of butter between the skin and meat.  Then he drizzles and brushes on maple syrup all over the bird.   Just enough to give the bird a bit of sweetness and color as it bakes.  Season with salt and pepper and bake at 375 degrees.   A 1/2  hour into baking, he takes it out of the oven and pours 3/4 of a can of beer into the baking pan to cook for another hour.  He bastes the chicken at the next 1/2 hour mark.  How long your chicken bakes depends on how large your bird is.  If you run a knife through it and the juices run clear it's good to go.  To accompany the roasted chicken, I wanted to use up some of the potatoes we got from the farm.  We still have a good bushel of potatoes in storage down in the basement.  So I made mashed potatoes and a side of sausage vegetable stuffing.  When the chicken was ready, I tool some of the chicken juices to make homemade gravy.  Doesn't this look like a mini Thanksgiving? 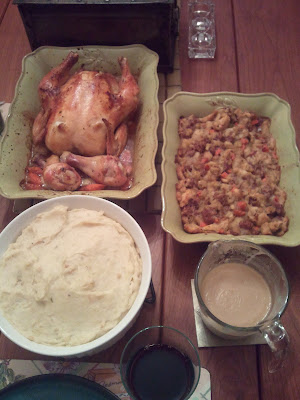 My husband doesn't cook very often, but when he does, it's a real treat! 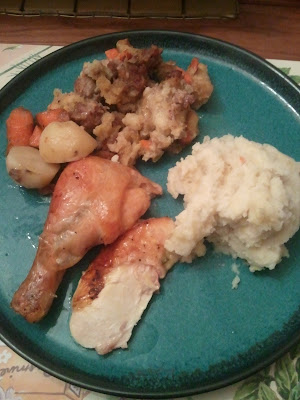