When I was a kid, 2000 seemed so futuristic, and here we are now in 2011! Seems almost unreal! Yesterday for New Year's Eve, my day was jammed packed with festivities. I started the day in Manhattan to meet my old highschool friend who now lives in Los Angeles. He came to see his family in Brooklyn for Christmas, but was stuck here in New York for a few extra days because of the blizzard. His return flight was cancelled twice and he had to wait until today for the next open flight home. Having your flight cancelled is very annoying especially when you are already at the airport, however, having to stay in New York for a few more days made it easier to swallow. He took advantage of his extra time here by visiting all his friends, including myself. So I told him that the flight being cancelled was a blessing in disguise!   We decided to meet up around 1pm, and the city was already buzzing with people and vendors selling their New Year's gear! 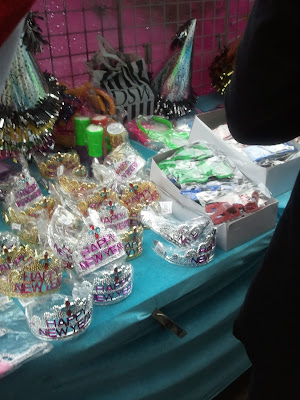 We met for lunch at Galaxy Global Eatery.  From their website, "is about Global cuisine – taking the most flavorful and innovative culinary ideas and ingredients from all over our world to produce a new and fresh cuisine that’s delicious, never boring and always engaging. A progressive establishment committed to living in harmony with the planet."  The waitress told us that it was their last day in business which made us pretty sad since they've been in business for over a decade.  It's heart breaking for me to see good restaurants close down because of the bad economy.  As a toast to the restaurant, we ordered up some of their signature drinks including a Bloody Mars, which is their version of the bloody mary.  It's quite good with just the right amount of horseradish and tabasco sauce.  Since the restaurant was closing down, another waiter came by and gave us each a cookbook written by the owners.  We were so honored!  He told us that even though they were closing, they still wanted to spread the word of progressive innovative cooking.   The Galaxy Global Eatery Hemp Cookbook

features hemp as one of the main ingredients in their cooking, from hemp oil, to hempnuts, which they say "is a cross between a hazelnut and a walnut".  I've never cooked with hempseed before and the recipes look amazing!  I'm always up for a culinary challenge so I can't wait to try them! 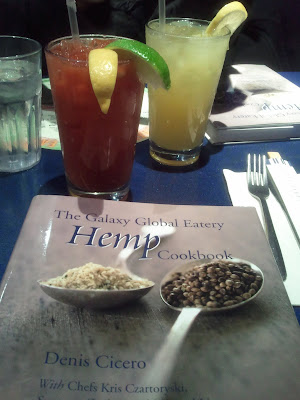 For lunch, I order the BBQ Seitan with fried eggplant and corn on the cob over Jasmine Rice. Seitan is a wheat gluten that comes from the protein portion of wheat, and is often found as a vegetarian substitute for meat.  Even though I like meat, I am a huge fan of seitan.  It takes on the flavor of what it's cooked with, and the texture to me,  really tasted like... chicken!  This meal was delicious, which makes me even sadder than the restaurant is closing down.  :( 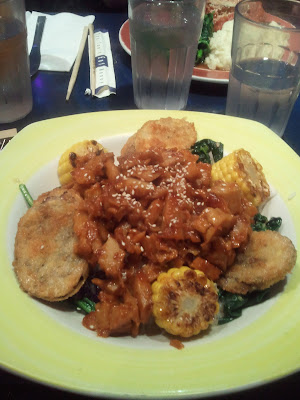 After lunch, we thanked the great staff and wished them well.  We also promised to use the cookbooks we received and try out the recipes.  I'll post about it on this blog when I get my hands on some of the hemp ingredients so that I can test out the innovative recipes.  At our next stop, we headed to a bar a few blocks away.  It's a little strange for me to drink at 3pm, but hey, it's New Year's Eve!  The bar we went to was really festive! The entire ceiling was covered with helium balloons. So pretty! I took this photo with my cellphone and it doesn't have a flash, so this photo really does not do it justice. 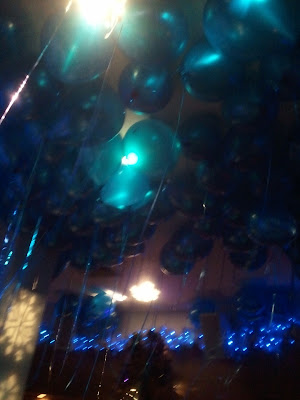 We sat at the bar, and there were some really great decorations!  It really put us in a festive mood!  Hope everyone had a good New Years Day! 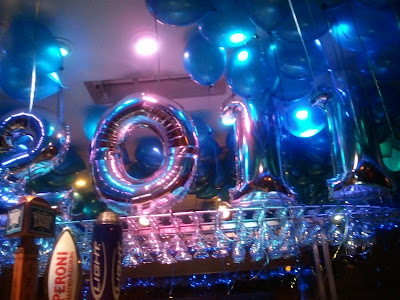