Last week, the hubs and I went to his work holiday party.  It was a lot of fun, good food, open bar and best of all, good company.  Every year, they have the party at a fancy catering hall and we have to buy tickets to attend.  It's pricey at $60 a ticket, but it's the holidays so it's okay to splurge once in a while.  There is always a raffle that everyone looks forward to.  They sell raffle tickets and raffle off prizes.  Some of the prizes are gag gifts, it's like that game show, "let's make a deal."  If your ticket is chosen, you can pick a box or an envelope.  Sometimes the box is something great, but sometimes it's a goofy prize.  The hubs bought 20 tickets, and during the raffle, his ticket was called.  He chose the box rather than the envelope and won this!  A new Amazon 3G Wireless Kindle!  The hubs was so excited since he's wanted one of these. 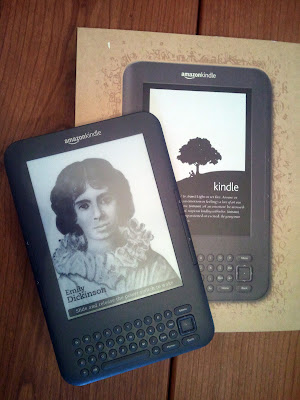 He was really, really lucky!  Because the envelope that he could have chosen had a $20 giftcard to Dunkin Donuts.  He got the better deal if you ask me.  He's been really enjoying his new gadget.  He's downloaded some great books and short stories.  This past week, you'll find him in his lazy-boy reading his Kindle with Sebastian Kitty on his lap.  At first, I was pretty skeptical about an "electronic" book.  But I am pleasantly surprised with the screen resolution, it's pretty easy to read.  It also has a really long battery life!  I'll have to look for some gardening books that we can download! 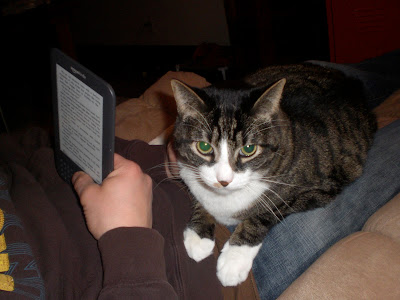